It is not that i have not been to Kolkata for a long time. In fact last year itself i went to Kolkata with jethu  (my uncle) …. it was a beautiful trip. i write all my train journeys in my travel notebook, but i feel too lazy to write them here on my blog. After sometime – i feel these journeys are too old to be written here. This journey is special and memorable for three reasons. One – traveled with Maa after many years. Second – traveled  by 1st AC for the first time. Third – Kolkata Rajdhani was late by 12 hrs. Record !! i had never crossed Allahabad in day time. Fourth – last but not the least – going to attend a wedding … of one of my cousin. So let’s start from the beginning.

Our train – Kolkata Rajdhani – leaves New Delhi railway station at 4:30 pm. We’re suppose to leave home by 2:30 pm for the station. i was still to come home from our main market. There was a huge jam on the road. i was on a e-rickshaw. My brother called asking me where i was and why on earth did i go to the market for. He was getting mad at me – before i could say anything – he put the phone down. Five minutes later he called again – i was prepared to listen to his yelling …

Instead he said “Take your time”.

i thought, ” Is he being sarcastic “.

Here “Prabhu” means Suresh Prabhu … our railway minister. God only knows how relieved i was. Got home – eat little pasta (mom cooked) – got ready. My brother didn’t like my kurta esp. its color which is pistachio green … one of my favorite now a days. Well we left home at 4:30 pm as our train was late by 4 hrs and was leaving New Delhi station at 8:30 pm. We reached New Delhi station quite early  … 6:08 pm to be precise.  i was needed to go to the washroom. The main railway washroom was terrible beyond words can describe. It was impossible to use it. Our train was to arrive at platform no.18. We got Maa a place to sit and kept all our luggage with her. Then Joy da and i went to platform no.1 – used the ladies waiting room washroom – which was somewhat use able. Then we went to Jan-Ahaar – we both had masala dosa and brought back idli sambar for maa. By the time we got back to the platform 18 … it was time for the train to enter the platform. Our was cabin A in coach H2. There were two more passenger in our cabin and both male. We’re talking to the TT and got to know that they do not consider female passenger traveling with male passenger in the same cabin to be a problem. i know it’s not a big deal – but later it came to my mind ….. Those  passenger traveling in our cabin were to got on from a different station and that too in the middle of the night (Mughalsarai). What if they got together with the serving staff and make us open the cabin door and then slit our throat and loot our stuff. Nothing is impossible – Right ?

Fortunately the staff was very good. The TT was terrible and i’m sure he was the one to allocate the seats to the passengers. When he came to check our tickets and ID – he told us to keep the door open ie. not to lock it from inside. We’re little worried.

Later the attendant who was serving us food told us to lock the door after dinner and sleep in peace. We told him what the TT said and in reply he said, “Not to worry – the passenger will board from Mughalsarai – and there a lot of time for it to come …. do lock the door from inside and sleep.

Well let’s get back to your journey –  we’re served our food … starting with soup and two bite veg. cutlets. We got busy enjoying the food and taking its photos as well. Joy da told us to update our “on going experience”. We finished our soup by 9:15 pm. Out side it was pretty dark yet beautiful. A lovely crescent moon was running along our train side. Cluster of “Kaccha” houses along the railway side can only be seen if their front yard is brighten by the electric light bulb …. did not see any lamp post or street light post. In some area twinkling light can be seen at far distance.

For the past few years – Joy da is traveling by 1st AC. He wanted me to experience it as well …. maa had traveled in 1st AC before too with my grandma …. so it was new for me only. I mostly travel by 2AC – though i don’t mind traveling in 3AC as well …. not like Joy da calling it a “Cattle Class” ….of course he does not want to hurt anybody’s feeling.

There are some differences between 1AC and 2AC …. berths are longer and wider – quantity and quality of food is better – serving crockery are better. The demerits …. if you are in a cabin and traveling with unknown passengers – there can be a little uneasiness. Whereas in 2AC – you are traveling with unknown people but there are many passengers …. you actually do not feel alone – like in closed cabin. Another thing i like about 2AC is …. one can overhear what is going on in other peoples life – not that i am dying to hear their personal life but in general to know a bit of their life. Anyhow …we had all the luxury to be our selves and enjoy the comfort of the cabin till we reach Mughal Sarai Jn. Collage of our food photos …. pleasure for a foodie like me !

We’re served dinner shortly after we finished our soup. Maa had Indian vegetarian food which was tasty and delicious. i had continental food which had  a bowl of pasta – two chunks of chilli paneer and a bowl of boiled vegetables …. peas – carrots and potatoes. Pasta was terribly over cooked – chilli paneer was okay and boiled vegetables were good. We finished dinner and ice-cream by 11 pm. We asked the person serving us …. if the train be able to recover the lose time and at what time we will reach Howrah station. We’re pretty shock by his reply. He said,” It won’t be able to reach Howrah before 6 pm next day. It may get delayed further as well”. He further told us that at Allahabad on wards there is dense fog already – visibility is very low. He also add, “Not to worry – we’re here to serve you with good food – eat and enjoy the journey”. Well what else does a foodie like me wants to hear !!

We made our bed and got comfortable in it. Maa fell asleep after few minutes. i looked outside to the lonely moon and the coming and going of the known-unknown stations. i normally wake up at interval at night while traveling by train – that night too i woke up several times. I was very surprise to see Central Kanpur station at 03:32 am. On normal days when the Kolkata Rajdhani leaves New Delhi at 4:30pm – it takes 5 hrs to reach Kanpur Central ie. at 9:30 pm. According to that – currently our train was running 7 hrs. late from its schedule time. When the train left Kanpur Central – one could still see houses but pockets of fog were also seen at many places. 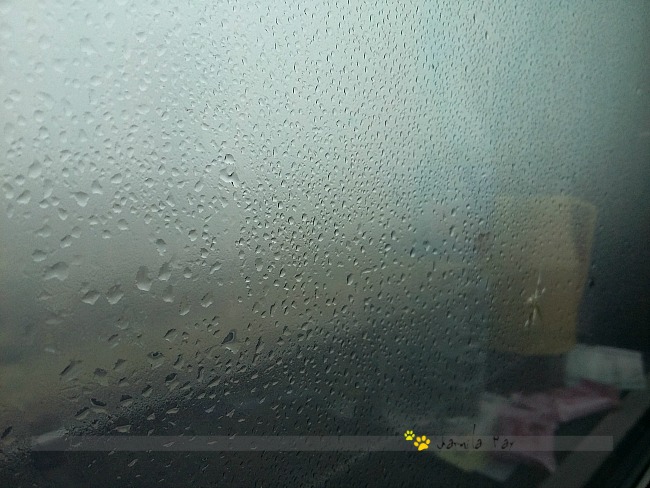 After sometime i must have fallen asleep. When i woke up again at around 5 or something – i could see only grey outside…. It was total grey.  At around 7 am …. it was little less. One could at least see the side rail line  – but still the fog was very dense … which for me was pleasantly beautiful – again i took many photos.

Even at 07:45 am – we had not reached Allahabad. Still the fog was very dense. At first i was happy that we’ll be able to see the river Ganga but with the fog – i was afraid we might not be able to see it. Bharwari – was the first station that was visible as the fog was  get lighter. From there Allahabad Jn. was 34 km away.

Breakfast was served at 08:50 am – quite different from the one served in 2AC.  It was a nice elaborated breakfast. Enjoyed it and clicked some more photos.

Reached Allahabad Jn. station after we finished our big breakfast – at around 09:50 am. Train stops there for 3 mins. This was the first time ever that i had crossed Allahabad at day time. By this time fog had cleared – though we’re unable to see the river very well. Maybe because of the large water body or what i do not know for sure but there was still dense fog on the river. Surprisingly all these years – i used to thought that we cross river Ganga but actually  we crossed river Yammun. So we cross river Yammuna twice – once at New Delhi and another at Allahabad. Bridge over river Yammuna at Allahabad … covered in fog !

i have traveled to and back on this Delhi-Kolkata route on Rajdhani for so many times …. and still it different every time. Actually going to Kolkata is more enjoyable than the return journey. i guess we are excited about what and how to spend an enjoying holiday. What to see and what to eat …. what to buy and so on. State of mind is happy and busy !! One of my fav. Giants electric grids carrying electricity from one place to another …. i call them MONSTERS ! Can’t remember the station … but most probably its Mughal Sarai JN. Life on the railway line …. and of course – can see the tail of the train ! My mom reading the  “Bhagavad Gita” … at Gaya Jn.

Our co-passenger got on from Mugal Sarai JN station  ….  he was traveling with two Bangladeshi man who were in a different cabin …. they ‘re in to some sari business.

Reached Koderma station at 17:04 on 03/02/2017  after leaving Gaya. Koderma is in Jharkhand and the surrounding was beautiful. Hilly mountain covered by different shade of greens – surrounded by forest and lots of natural resources. One of the famous Jain temple “Parasnath” is also in Jharkhand – in fact Kolkata Rajdhani stops at the station which is also called Parasnath.

Slowly it was getting dark as the sun was getting ready to go down for the day. Our energy level was going down too. After sunset we didn’t do much – chat with maa and with others over whatsapp. Finally – we reached Howrah at more or less 10:25 pm. It was a record – Rajdhani was late by 12 hrs. Narayan mama (one of my maternal uncle) came to the station to receive us. Maa trying to take photo of the beautiful surrounding of Koderm !

Narayan is the name of one of the ultimate Hindu God …. who is the keeper of our well being.  Narayan is my uncle’s name too. So Narayan is used here as a metaphor.

So the translation will be some what like this …. “Now God himself will come to your salvation”

It was end of a long enjoying beautiful journey ….. but the beginning of a lovely holiday !!